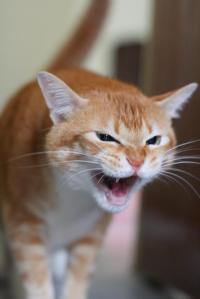 My cat Mikko thinks he can bully us around. At one point, he was the chief terrorist in our neighborhood. But, when he became sick, he was treated, then we decided to transition him to an in-house cat. Of course, it’s a nerve-racking transition for him.

He still craves to go outside. He has nightly tantrum and refuses to let us sleep. To get our attention, he’ll scratch the windows, doors, runs back and forth all over the house; even Jump on the bed, dresser, slams his head/ his body against anything he can manage to break.

I swear this cat does not think he’s an animal.

So last night, when he noticed he was being ignored in spite of his unbelievable bandit performance, he decided to attack his little friend Moina, our female cat. At last, the poor cat was forced to hide inside the closet. But Mikko was still not satisfied. So when I tried to intervene, he turned toward me to hiss at me like a snake.

“Mikko, you better stop it!” I yelled back.  But he was way too angry. So he turned around to say,

For the first time I was really scared of my cat, but I couldn’t show him that. So I stared back at him and yelled:

I did such an unbelievable performance, that Mikko froze for a few seconds; while he stared at me, he then ran to hide under the bed.

Well, I’m not certain what really drove him away – between my roaring tone of voice or my horns?

But  one thing  I was certain of, “Cats can see demons.

a topical new musical and other progressive, creative works