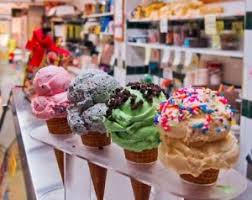 Friday night has always been a special night for our family. Growing up In Haïti, whenever we heard my Mom screaming, “Get in the car, I said!” My siblings and I would run to my father’s Ford, station wagon, while we pushed and shoved our tiny bodies, just so we can occupy the best seat. Because we knew, it was movie time. Yes, my father would drive us to the local, or should I say the ONLY drive-in theater in Haïti.

Now that we are older, both my sister and I continued with this fun tradition with our own children. Every Friday night, we would meet at the Regal Theater. And, quite often, we arrived there about an hour earlier, just so we can enjoy a scoop of ice cream prior to the movie.

You heard right, for our family, it was all about the ice cream, not popcorn. So let me explain the ice cream selection process for my family. Or, should I say particularly for my sister. Because for me, it was just a matter of pointing my finger toward the same flavor I normally chose every Friday. No, I don’t like adventure when it comes to my ice cream. Food and wine, yes. But, once I find my comfort zone with a certain flavor of ice cream, I can pretty much order the same one throughout eternity.

However, my sister, my niece and my daughters, waiting for them to select a flavor, was like watching the movie previews.. I always made sure I ordered first, because I knew I needed something to preoccupy my mind and my mouth, while the rest of the family start traveling aboard through their imagination. So, once the clerk would hand me my boring vanilla/chocolate or Rum raisin ice scream; he would say:
“Who’s next?”
My loud mouth daughter Cassie would step up, then say: “Which one are you getting Tatie, I don’t know what I want!”
My sister would answer: “I don’t know. This week I want something exotic, darrrre-rrring typppe!”
My niece: “Wow Mom, look at that orange looking one!”
My sister, shaking her head, smiling like she was a child watching a Disney show:

“Mm! Must be a new fla-vvvor; about that “grreeeeen leeeeking – one over there – Looks daring, you think?”

Meanwhile, I’m imagining the poor young clerk thinking “For God’s sake, when those turtle creep are going to order?”
“Turtle creep?” I would answer, as if I was reading his mind. “For your info, they are the three stooges!”

As if they were oblivious to all the other customers waiting to be served. They don’t even realize how the poor boy was wishing he was from another planet.
“Is that a new flavor? “My daughter asked as loud as she can be.”
The clerk forcing himself to smile, raised his right arm before he made a U-turn toward the opposite direction.

With his fashion flair, one would assume he was a girl. Pointing at the light green flavor, he said:
“Are you referring to “thisss” One?”
“Yap!” My sister answered.
Suddenly he was excited. As if that particular flavor reminded him of a pleasant love affair.
“Wowww!” He whispered with a nice smile. “D’you like to taste?”

His body posed like a model in a fashion show. He continued,  “This is one of our new flaaa-vor!! Mm-Mm! Like it! Let’s see! Haaa-yes! It’s the “ Mustachio- Jumbalaya – Meringue –Salsa – Domingo – La Vida flavor!”

The three stooges as excited as the clerk, totally surrendered to his enticement. So I groaned though my teeth, “Oh my God, here come Cinderella wicked step mother, and her two villain sisters!”

Then, just when I thought my torture was over, my niece pointing her finger, “But Mom, what about that hot pink, almost red one, all the way in the corner over there?”
As my sister starts walking toward there, she said, “That’s an inter-res -tinggg color! What’s the name for that one?”
I answered: “Murder, she wrote!”

While the clerk smiled, our brief eye contact confirm our silent torture. Just then, he finally realize the name of the game. So, he placed his hand on his chest, as if he was tenderly caressing himself, while the other hands was held on his hip, over his blue green paints. Then he said:
“You know, it’s interesting you should call it “Murder, she wrote.” Because, I thought it was something like “The Bloody Mary – Dracula type flavor. But the name is actually “Vengeance.” “How-e-vveeer, for you ladies, I will call it “The silent killer.” What do you think?
“Awwww!!!” My niece replied. “In that case, give me a scoop of that one too!
“Me too!”
“Me too!”
I would follow up with “Me four!” But, mine is the same rum raisin you served me earlier!
“You so boring!” They would say.

If you think watching them brainstorming the names of the ice cream was painful, wait until you sit among them, while they dissect the flavor from the two scoops of ice cream.

a topical new musical and other progressive, creative works